I was interested in this rod after being so impressed with my 7wt volition. I was lucky enough to win this rod in a competition that Tom was running on his facebook page the other week so I was over the moon as I was considering purchasing the rod if I had not won it. I have never used a fibreglass fly rod before but after half an hour of adjustments and slowing my cast down a bit I was rocking and rolling.

My main intention for this rod was to use it for stalking big specimen trout in difficult to reach places such as under the trees etc especially in the summer months where if you was using a 10 foot 7 weight you simply would not be able to have the room to cast with a full size rod.

Tom has stated that he has taken carp up to 15lbs on this rod so I was hoping i was up to the task of what I wanted to ask from it......I was initially worried when I felt initially how bendy the rod was......however my fears were put to rest straight away I put this rod through its paces yesterday talking four decent trout including a golden trout around the 5lbs mark.

This rod had no problem at all tacking the hard fighting trout of Rockbourne Trout fishery in the New Forest. The rod certainly bends but at no point did I feel my rod was in any danger. I always play my fish on the reel anyhow so the fight is distributed 50/50 between the rod and reel.......If you want to yank a big trout in using hand stripping then you probably should be using a 10 foot 7 weight rod.....using a bendy fibreglass rod backs fighting fish fun and in my mind thats wha fishing is all about.....FUN

I’ve been using this rod for 2 months now, it’s quite simply awesome. Casts a #4 line like a dream, throw a #5 El Guapo like a bullet! A #6 line loads superbly when I’m fishing the canal for perch and Zander. The only thing I’ve not tried yet is a #3 on small streams but that won’t be long!! The power is quite unbelievable, it’s a pleasure to use! 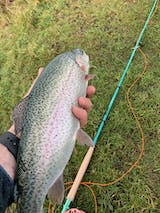 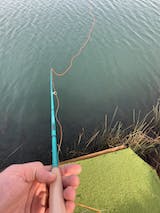 It’s awesome it feels like a 3 weight bends like a 3 weight and casts like a 6 weight but it’s a 4 weight, I can cast 90’ the whole line!!! Like Tom shows on the video but also will cast short I’m so impressed with it!!!

What a fantastic rod. First time I played a fish on it, I thought it was a Marlin.

I bought these rods a month ago & have had great fun with them catching everything from 6” wild browns to rainbows over 3lb. Roll Casting is outstanding & the protection of light tippets superb. They are great fun even with small fish but cope well with big hard-fighting rainbows. Perfect small stream rods.

S
Simon D (Kendal, GB)
This has become my weapon of choice

After watching a few of Toms videos YouTube, I decided I wanted a new little river rod. The California in the videos looked like it fit the bill. I read a few online articles about glass rod before committing, as always having used carbon rod (just my age I guess) I was a little worried about glass of old been soft and spongy... But let me tell you that defiantly isn’t the case! The California arrived and I was instantly impressed by the build quality, having always used sages this is just as good, the cork is first class, the blank a beautiful color and the fit and finish is perfect. Having used the short head weight 4, let me tell you, it’s casts just as good as it looks. No sponginess only perfectly formed accurate loops, the tip although soft has fast recovery so ‘carbon casters’ don’t need to worry. It’s just smooth and a joy to cast. It’s fantastic!

Been fly fishing for over 20 years and never have I been more blown away by a incredible piece of kit!
This rod casts effortlessly, I put the sunray 5wt competition float through it today, it flew out like an arrow to the other side of the lake! Yet it presents the flys so delicate, it’s totally rewritten fly fishing for me! Can’t thank you enough Tom, keep up the good work. Inspirational!!!

Microlite Rod £549.00
Featuring the world's most expensive guides, Torzite. In K series anti tangle, low friction strippers and Seymo diamond coated snakes, all in smoke grey finish. Torzite rings are the lightest, slimmest, hardest inserts in a ring currently in the world. The blank, a 20% slimmer new carbon technology developed by Sunray, called Super Slim (SS). Finished in gun metal grey and unvarnished to give a non reflective finish. 20% slimmer Flor grade cork handles reduce weight and give an unparalleled connection to the blank. Carbon rod tubes & 'Airmesh' rod sock weaved to allow a wet rod to dry inside the tube. The mesh has air holes weaved into it allowing air to pass and the blank to breath within the tube. And, an innovation with alignment guides that allows the spineless blank to offset the guides reducing friction by up to 30%.
Micro Thin Nymph £49.99
A level line on low stretch braid core with exposed core loops for extra smooth transition to fine tippets and indicators. Used by many teams in World fly fishing competitions to give direct contact to subsurface nymphs in calm or fast water. Ultra thin to minimise sag between the rod tip and nymphs, the most sensitive direct contact to your flies you can get. 0.55mm diameter to confirm to FIPS Mouche international competition rules, the ultimate in direct contact fishing. Exposed core micro welded loops Micro thin entire length Level line
-29% sale
100% Fluorocarbon Tippet £9.99 £13.99
Breaking strains are higher than stated due to labelling error.  50m spools
Large Fly Box for Small Flies - 3 Magnetic Strips £14.99
3 MAGNETIC white compartments hold flies automatically Slimline fly box that holds 69 small flies in foam slits 3 Magnetic white 'working patterns' compartments that prevent flies being blown away. We use these for our tray of flies that we've used through the days fishing. Clear view lids make fly selection easy and quick 18.8cm Length x 10.3cm Wide x 1.7cm Deep Flies not included