The ultimate all-rounder. If you can only take one line, make it the Competition.

Just load the Overhang Marker to the tip of the rod and watch it fly!

This line gives stable flight, and will take you from situations with limited back casting space to fishing off the rocks on the coast. A medium head length floating fly line capable of huge distances with minimal back cast. Use with small, medium and large flies.

Think bank or boat, still water or river.....  a truly versatile line that will make you feel like a casting hero.

Get some lineslik on it, load up the rod with a couple false casts and 💥 it’s out to the backing. A stripping basket reduces drag and allows the line to slip out easy!

Nice line, overhang marker a real game changer allowing less experienced anglers to shoot longer lines with less snagging the ground behind! Shoots well, even had a fish on a hard day helped by those few extra feet! 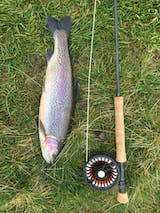 Simple ..buy one .
Memory free , running line resists tangles , shoots like nothing I've used before head diameter is large and coating makes a lot of noise during casting and retrieval , but after an hour of using it matched with my rod a couple of coils of fly line left on the reel every cast .
Lays lovely on the surface very little wake on retrieval , lifts easily for rapid covering of moving fish .
Overhang maker okay I started off looking for it but I found the head loaded the rod so well , after a short while you don't even look for it .
It simply shoots lands retrieves well bite transmission is great and line responds well to being pulled all over the lake .
I'll be having another even at full price 😂
Photo attached , I wasn't even trying felt the like rod kick as the line stopped on thea reel , pulled the rest off kept it like that all day .. 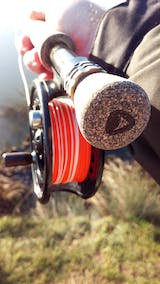 I’ve tried many different fly lines in the past and until about three years ago I was quite satisfied with the likes of the Rio Gold, & Loop Optis, but having purchased & fished with Tom Bells Jeremy Lucas Dry Fly I was very impressed with its performance.

I have now tried the Competition Float and I must say it casts just as well if not even better, the overhang marker makes it fool proof for the beginner or novice it truly flies out,making distance casts an absolute dream.

It’s delicate to lift off the water especially if you use his line slick to combat water surface sticking, with one nice back cast with the over hang marker in the stripper ring you can with ease cast massive distances with ease and grace. All of his lines being slimmer,Spool on most reels allowing more backing than conventional lines. I have to say after fishing with the Jeremy Lucas line for three years now it’s as good as the day I bought it and I am a Flyfishing Instructor so it gets some stick.

I’m definitely going to be buying a Competition Float 2020 and I can highly recommend this line to anyone.
Mike Lonsdale.
GAIA Flyfishing instructor. 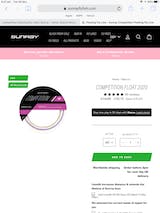 Line performed perfectly on our first outing. Easy to cast, out to great distances with great presentation. Would recommend anyone to give it a try.